We check, pack and supply roses

It seems to be almost a standard, the cardboard collars on the bucket 577 with large-flowered rose. Where it was once used as product protection, in many cases it now also has a marketing function.

According to Fresco Flowers, it is no longer of this time to introduce such volumes of cardboard waste – which is generally only single used – into the chain and we have broken into it. Earlier research among a large number of buyers showed that although the collar is considered an addition when it comes to protection and promotion, it is also striking that around 50% of the collars are immediately removed from the bucket after purchase before the products are further in the chain. In addition, it contributes to better packaging and trolley loading.

In recent weeks, Fresco Flowers has therefore looked critically at the various varieties without compromising on quality, but with the aim of raising awareness. The result is that the use of collars has been reduced by 85%. This has already led to the first positive reactions from the trade. In addition to cost savings for both buyers and our growers, this reduction amounts to converted 62,000 kg of cardboard, which will be saved annually in waste.

This is a good first step, but when it comes to sustainability we will face even more challenges in the coming years in terms of packaging material in the floriculture industry. 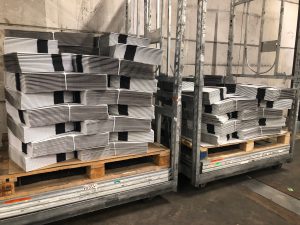 we check, pack and supply roses